Local bonds are bouncing in the recent political hotspots (South Africa, LATAM), but there is a question whether the risk premium will continue to mean-revert or it will have to move higher in the medium-term as the baseline.

This is the question we’ve been asking ourselves this week as we watched the deadly riots unfolding in South Africa. The situation on the ground seems to be de-escalating, and both the currency and rates retraced some of the week’s losses – albeit South Africa had the worst weekly total return in the J.P. Morgan’s local bond index (GBI-EM, see chart below). What we are struggling to understand is whether the country’s risk premium will mean-revert to the pre-riot levels, or South Africa would require a higher medium-term risk premium as the base line.

The analysis we’ve seen so far suggest that the impact on 2021 GDP growth is likely to be limited, and that the budget can absorb the shock without a material longer-term impact. South Africa’s central bank – widely considered to be among the most credible in emerging markets (EM) (if not in the world) – will provide its updated risk assessment later this month, but is expected not to panic and stay on hold. Suggestions that the crisis can force President Cyril Ramaphosa to seek alliances outside the ANC and that it can strengthen local institutions and NGOs are tantalizing. There is an opportunity, but there is also a risk. South Africa has one of the highest unemployment rates in EM (over 30%), one of the highest inequality ratios in the world and its per capita GDP is way below the rating peers.

South Africa is not the only country/region that saw groundbreaking political developments in the past few months. LATAM is very much on our radar. Local bonds had been bouncing lately (see chart below), as the recent negatives (Peru’s elections, Colombia’s downgrade, Chile’s referendum) are getting increasingly priced in, and there are signs of policy pragmatism on the ground (Colombia still pushing ahead with tax reform, Peru’s president-elect making reasonable personnel calls, etc.). The regional growth outlook has been upgraded the most in EM, as vaccinations are gaining pace, and central banks are responding to higher inflation in an orthodox manner (=rate hikes). Stay tuned!

Charts at a Glance: Local Rates - Political Risks Are Hitting Some EMs, Priced in Others 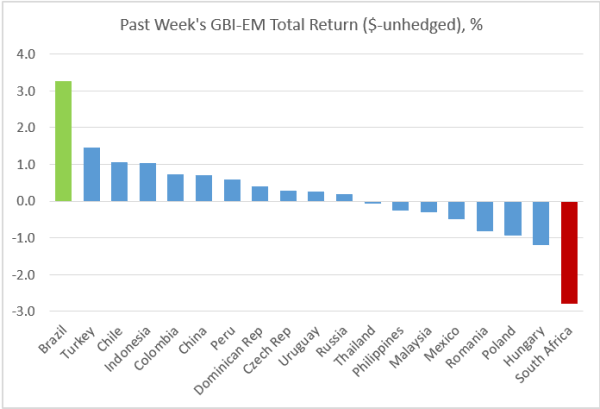