Duality of Rate Hikes in EM

Emerging markets (EM) Asia’s inflation is running hot, while the growth outlook ex-China is still better than in other EM regions (see chart below). This explains why regional central banks are powering ahead with frontloaded rate hikes. India surprised again today on the hawkish side, delivering a larger than expected 50bps rate hike. The above-consensus inflation print in the Philippines suggests that the central bank and the new governor will deliver another large rate hike in August. And Indonesia’s faster than expected Q2 GDP growth (5.44% year-on-year) will test the central bank’s resolve to remain on hold at the next meeting. Perhaps the most intriguing monetary policy case in the region is the Bank of Thailand. The country’s inflation is 3+ standard deviations higher than the 5-year trend, but the much-anticipated liftoff is yet to materialize. Today’s inflation release (July) was a touch lower than expected, but it is high enough to pave the way for the inaugural rate hike next week (some brave souls even expect a 50bps move). The hawkish pressure on Asian central banks – most of which were latecomers to the current cycle – might increase following today’s surprisingly strong labor report in the U.S., which can lead to more tightening by the U.S. Federal Reserve (Fed).

By contrast, we keep getting more dovish surprises in Central Europe – even though headline inflation is in mid- and high-teens. Yesterday’s policy rate pause in the Czech Republic was followed by a smaller than expected rate increase in Romania (+75bps). Hungary’s tightening “surge” looks like the exception rather than the rule. One possible explanation for Central Europe’s dovish pivot is the rapidly deteriorating near-term growth outlook (H2 growth “cliff”). The latest activity surveys in Poland and the Czech Republic showed a sharp move deeper into contraction zone, and central banks believe this can help to cool domestic inflation pressures going forward. The local bond market, however, might be less forgiving if it thinks central banks are falling behind the curve.

Where does this leave LATAM? Brazil’s slower pace of tightening is well-deserved – the central bank was the hiking pioneer in the current cycle, and it hiked super-aggressively. But as regards Brazil’s regional peers, the picture is more nuanced. Today’s sizable upside inflation surprise in Colombia – July inflation accelerated to 10.21% year-on-year from 9.67% in June, and core CPI jumped to 7.29% year-on-year – screams “Hike, baby, hike!” even after a sizable +150bps move a week ago. Chile’s decision to re-instate currency interventions – which worked brilliantly – can help to reduce price pressures, but the next inflation print (on August 8) will be key. Stay tuned!

Chart at a Glance: Downside Growth Revisions – Some EM Regions Are More Immune 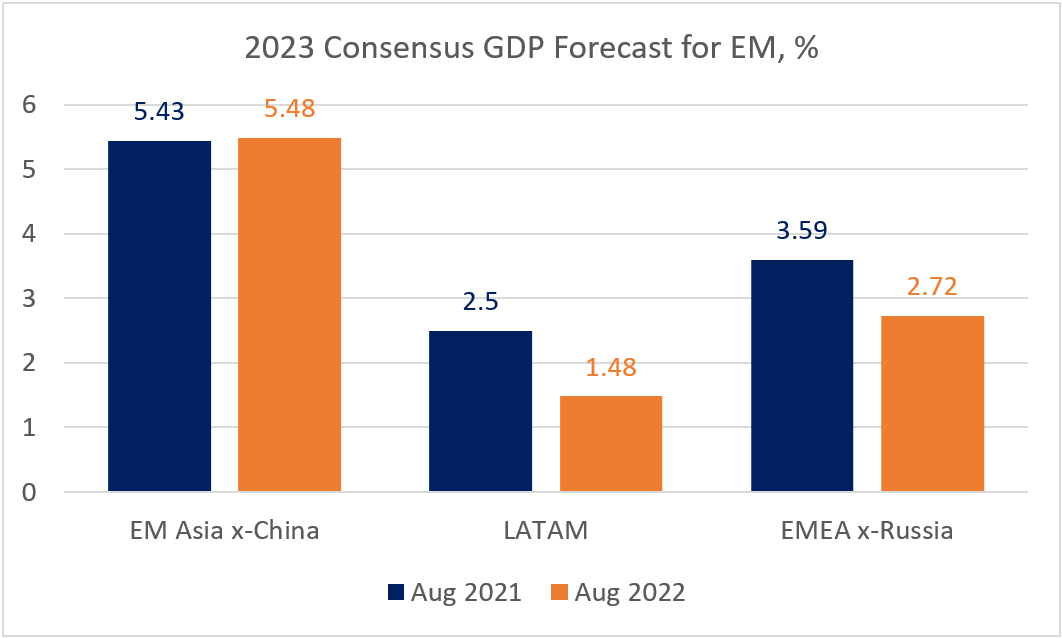 All Kinds of Pivots In EM

All Kinds of Pivots In EM

EM Hiking Cycle – The End Is Nigh?