Susan Hockfield, former President of MIT, wrote a book about living things being “machines.” This concept is applicable to the redwood forest my family and I visited last month. The way the forest is being managed by the Pacific Forest Trust[1] (PFT) has made the forest a better carbon-eating machine. By way of background, redwoods are both the tallest and oldest trees in the world. Old growth redwoods can be over 1,000 years old and can measure tens of feet wide. Unfortunately, most old growth redwoods in the U.S. were wiped out in the 1800s—1.8 million acres out of 2.0 million acres—to build San Francisco amongst other things. Currently, commercial redwood forests, of which some 900,000 acres are currently logged, consist of second and third growth trees that do not grow all that large, tall or old. 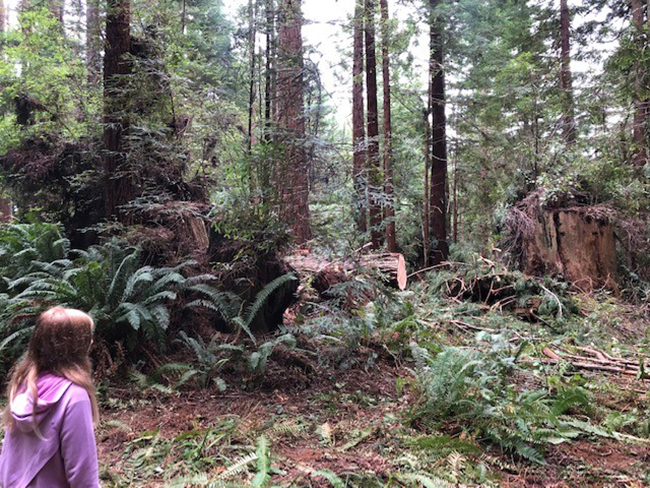 An Old Growth Stump at Far Right—Redwoods were Giants!

So what took us up to that neck of the woods—as it were?

My uncle Fred, who loved trees, had bought this particular forest (then somewhat over 2,000 acres) on the Pacific Northwest coast back in 1969. Every year he used to fly up from New York (as we had done), where he worked as an investment manager, to see how his beloved trees, both old and new, were prospering. To be sure, to Fred, the forest was a working forest, but, in addition to producing timber and as importantly, it was also a home for its birds and other wildlife inhabitants. Uncle Fred died, at age 82, in 2000 and the forest, consisting of four redwood forest parcels all in the vicinity of the small town of Arcata and all now the property of the Fred M. van Eck Forest Foundation, is managed (as part of the Van Eck Forest Project) under a conservation easement by the Pacific Forest Trust.

What is a Forest Conservation Easement?

Since I’ve now used the word twice, I think it’s time to explain exactly what a conservation easement is. An “easement” is a legal term for dedicated rights over land use; it becomes part of the property deed, forever. The working forest conversation easement on the Van Eck Forest ensures that it will never be lost to development, converted to other uses or logged in an unsustainable manner.[2] So, in addition to ensuring that the forest remains just that—a forest—it also ensures that the trees are harvested selectively and, thus, sustainably, and managed for a particular goal. That goal is to restore the function of an old growth forest, while not being, of course, old growth. Any timber harvesting will never remove more than 50% of the forest’s annual growth. Indeed, selective harvesting is like weeding—it can accelerate the growth of the overall forest by giving some trees more light and air. For purposes of comparison, a conventionally managed forest would typically be more aggressively harvested, removing as much as possible of current standing timber and continually cutting as much of the new growth as regulations will allow.

The first wonder of the sustainable forestry practiced by the PFT is that it resulted in faster forest growth than expected. Cutting down only about 20% of the trees every 15 years (PFT started at a harvest of every 10 years) has allowed the remaining trees to grow faster and the board feet[3] (BF) per acre to more than triple—from 20,000 to 70,000 BF/acre over that time period. (For reference, old growth spacing is 15-20 trees per acre.) This has enabled the harvest to increase from 1,000,000 BF/year to 1,300,000 BF/year. It’s the power of compounding!

After the original harvest at the turn of the last century, the share of the forest consisting of spruce trees had gone up from 10% to 35% because they grew through seeds—faster—whereas redwoods grow through stump sprouts.[4] (Chinese tariffs have destroyed spruce demand; now, they cut the spruce to make way for redwood and the fallen spruce are nutrients for the forest floor, dens for bears, decomposing quickly and creating rich soil for redwoods.)

The second wonder of the sustainable forestry is that it enabled a “canopy” to develop—like a very tall umbrella over the forest floor. By allowing trees to grow for longer time periods, they grew taller and wider, thereby creating a habitat high above the forest floor. This canopy attracted rare, endangered animals such as the Spotted Owl. In fact, the Van Eck Forest became the first to gain a Safe Harbor Agreement from the U.S. Fish and Wildlife Service (USFWS) to allow continuing management along the same lines as it was, promoting more habitat for the Spotted Owl, rather than making them stop harvesting to protect it. Even though we learned that the Spotted Owl is under threat from the Barred Owl, it was still a great development to learn about.

A Resident of the Rebuilt Sustainable Forest Canopy

The third, and most amazing, aspect of sustainable harvesting is the better carbon-eating aspect of the forest. The Van Eck Forest was the first ever to register with the California Climate Action Registry (CCAR). Now transformed into the Climate Action Reserve, the registry, created by the state in 2001, was established “to promote and protect businesses’ early actions to manage and reduce their greenhouse gas (GHG) emissions.” In the Van Eck Forest’s case, it is by reducing carbon dioxide.

In fact, through its sustainable forestry practices, over a 100-year period, the Van Eck Forest Project trees in California will permanently reduce over half a million tons of carbon dioxide (CO2) emissions by absorbing the gas from the atmosphere and storing it as carbon. Because old redwoods can store substantially greater volumes of carbon over a shorter period of time than young forests or tree planting, working forests like the Van Eck are particularly effective at storing carbon as they grow older.[5]

In 2008, California not only included forests as carbon reduction projects, but also gave its approval to the Van Eck Forest to sell carbon offsets. Since then, through the state’s cap-and-trade program, the Van Eck Forest has been able to supplement its revenues from timber sales with income derived from the sale of registered emissions reductions or “carbon credits.” (Amongst early buyers of these were House Speaker Nancy Pelosi and former Governor of California Arnold Schwarzenegger.) However, getting carbon credit certification is not a cheap process and the Van Eck Forest, at 2,200 acres, is probably amongst the smallest that can afford it. Its acreage is gridded with “permanent plots” in each of which the trees are individually identified with a carbon marking system.

What all this means is that, in addition to continuing to capture tons of CO2 every year, the forest has been able to become economically self-sustaining. But it actually goes even further than that. Millions of dollars of additional revenue have been generated and returned to the Fred M. van Eck Forest Foundation which has used them to support forestry and hardwood tree improvement research, together with graduate scholarships, at Purdue University.

I think it would be fair to say that the Van Eck Forest Project truly has been at the forefront of efforts to show just how forests here in the U.S. can also help in both reducing CO2 and improving environment. To quote the words of the Pacific Forest Trust: “The Van Eck forests are living forest laboratories that demonstrate how natural forest management restores biological diversity, protects watersheds, creates measurable and impactful climate change solutions, and yields competitive returns, fine wood and dependable jobs.”

If you are ever thinking of going to that part of the world, please do go and have a look. It is very well worth it. And if you’ve never seen old growth redwoods before, you are in for a big surprise: they really are huge.

It is important to note that this sustainable forest innovation came through the vision and hard work of Laurie Wayburn, head of the PFT. Without her hard work, none of the benefits of sustainable forestry could have been realized. Go Laurie!

My final observation is that 2,000 acres is actually not a lot of land in the scheme of things. The PFT is looking for people to help them buy additional forest land and make the machine bigger. If you want to help, go to Pacific Forest Trust. To learn about Fred van Eck’s gift, see this news item from Purdue University and also read about VanEck’s sustainable forest project.