The escalation of the war in Ukraine – President Vladimir Putin’s mobilization announcement and a threat to use all means necessary to protect Russia’s territorial integrity (whatever that means) – is weighing on sentiment this morning, with Central European currencies hit the hardest. This happens as the market is also preparing for the U.S. Federal Reserve’s (Fed’s) policy decision in the afternoon. The expectation is that the Fed will remain hawkish – a hike of at least 75bps and the terminal rate of 4.5% – but Chairman Jerome Powell’s press conference will be just as important.

One question that’s been raised frequently is whether the hawkish Fed would put more tightening pressure on emerging markets (EM) central banks. We’ll have an answer this afternoon – the central bank of Brazil is scheduled to meet after the Fed, and the consensus believes it will remain on hold, ending the current hiking cycle. But is Brazil’s example representative? Brazil started to hike early and very aggressively, and currently Brazil’s real policy rate adjusted by expected inflation is the highest in EM. Further, Brazil’s policy rate differential with the Fed would still be in double–digits even after today’s expected central bank outcomes (i.e., Fed hiking by 75bps and Brazil staying on hold). The chart below shows that LATAM is generally in a pretty good spot as regards the policy cushion relative to the Fed. EMEA’s policy cushion also looks quite decent. However, the policy rate differential between EM Asia and the Fed will narrow to just over 100bps.

EM Rate Differentials with The Fed

Does it mean that some central banks in EM Asia would have to accelerate the pace of tightening? Especially latecomers like Indonesia? The Indonesian central bank is meeting tomorrow, and the median expectation is still for a moderate 25bps rate hike. Some brave souls, however, think that the central bank would have to frontload more hikes (+50bps). An additional consideration here is the government’s recent decision to raise some fuel prices by a larger than expected amount. This is a fiscally responsible move, aimed at reducing budget subsidies, but it will push headline inflation higher in the coming months. Stay tuned! 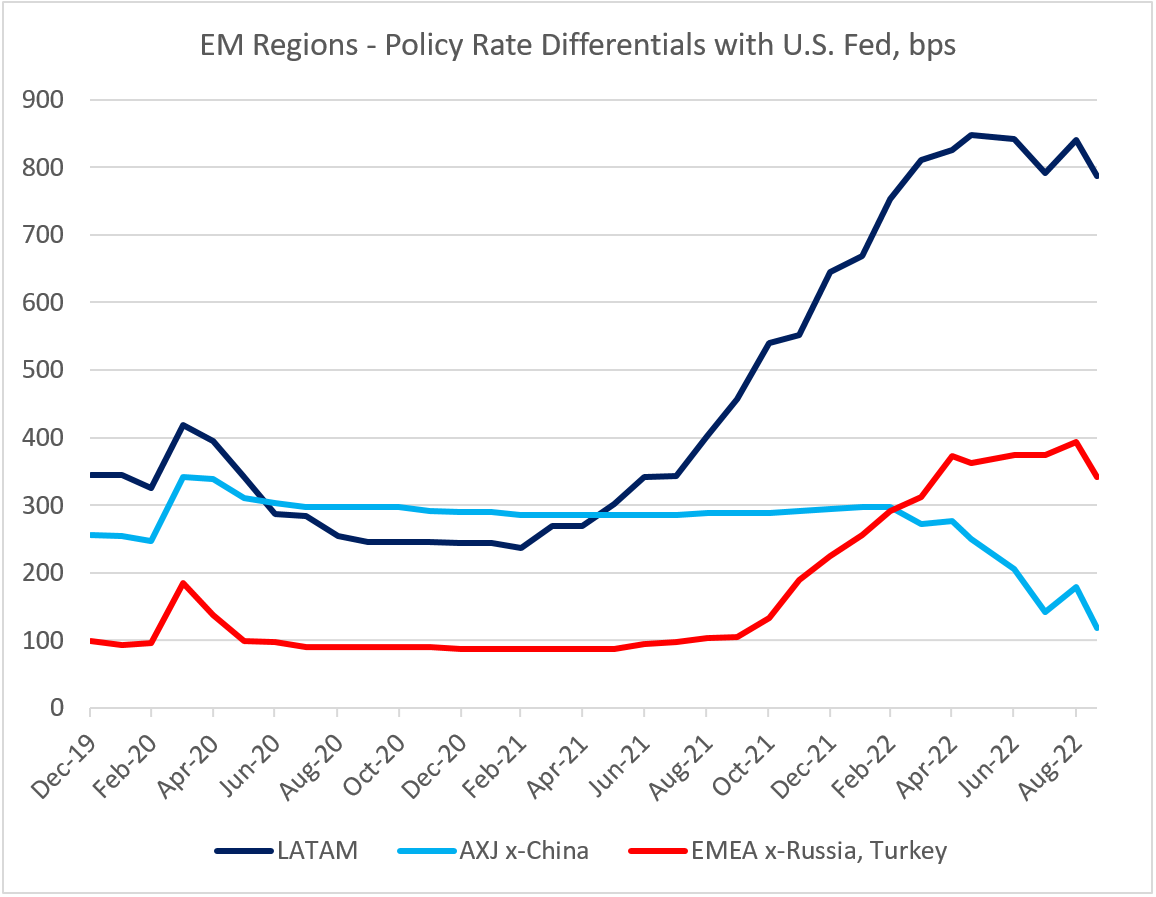 Aggressive rate hikes reflect well on EMs’ policy credibility. But would EMs be able to lead the global easing cycle without adverse consequences for economic fundamentals or asset prices?