It’s a risk-on day today, but global recession calls are getting louder. The consensus is zeroing on Europe as one of the world’s “weak links” – in part due to the impact of the Russia/Ukraine war on energy prices and transportation networks. These bottlenecks are not expected to disappear any time soon, which explains, for example, why the expectations component in today’s IFO survey1 in Germany stayed weak. It is encouraging that Germany’s sentiment indicators remained above the levels typically associated with recession. The problem, however, is that Europe is also facing additional growth headwinds related to China’s policy-induced slowdown, as the trade connections between the two are strong.

Regardless of Europe’s near-term growth outlook, it looks like the European Central Bank’s (ECB’s) policy rate liftoff is in the cards for July (as per the latest blog from the ECB President Christine Lagarde), and that it will be followed by more tightening (another 75bps or so) in the remainder of the year. And this faster ECB normalization may test the resolve of monetary authorities in Central Europe, some of which appear to be settling into a slower rate hike routine – in part due to the expectation of slowing domestic demand from Q2 onwards. Hungary’s economic sentiment and consumer confidence indices seem to corroborate this scenario – they looked noticeably weaker in May. On the other hand, Poland’s surging retail sales (see chart below) point to potential growth tailwinds – but also new inflation risks – stemming from spending and consumption by Ukrainian refugees.

Growth fears are back in South Africa as well, due to the combined impact of electricity blackouts, COVID flareups, and recent floods. Still, South Africa can probably ignore these issues for one day and bask in the glory of its outlook upgrade by S&P. The move was not quite expected – we generally do not see a lot of upgrades these days – but it shows that rating agencies took notice of the recent progress made by the South African government on the fiscal front. Growth, however, might be a key consideration as to whether or not positive outlook will translate into a proper rating upgrade. Stay tuned! 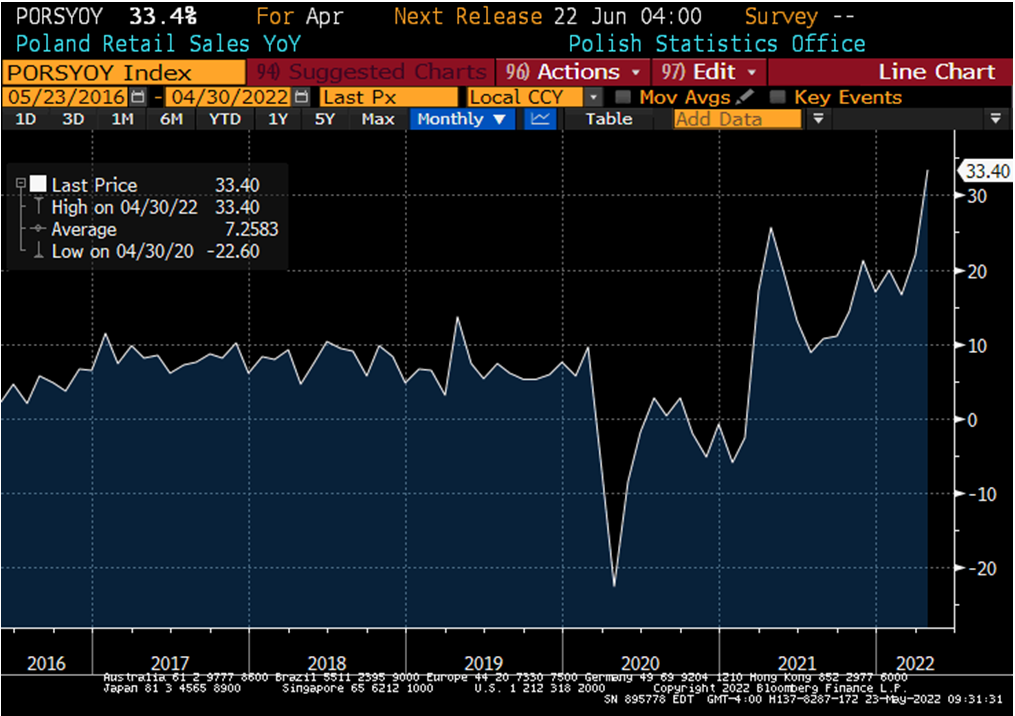 The market narrative appears to be moving away from high inflation to recession risks. How do emerging markets fit into the new picture?

An uphill inflation battle means that the EM hiking cycle is likely to last longer than the Fed’s, albeit at a slower pace.

We are seeing some EM “green shoots” in the predominantly negative global growth dataflow. Can EMs buck the DM trend for much longer?