The number of major emerging markets (EM) with headline inflation still below the target is now down to two – China and Indonesia (see chart below). This happened after South Africa’s inflation overshot the consensus in May – accelerating to 6.5% year-on-year and saying “Goodbye” to the target range. A good thing is that the South African central bank (SARB) has already started its tightening cycle. Another good thing is that the upside inflation surprise was driven mostly by food and fuel – core inflation rose significantly less in May. This should reduce pressure to accelerate the pace of rate hikes – provided there are no surprises on the demand side (such as rental prices).

A really great thing about South Africa’s central bank is that its credibility remains intact – unlike (possibly) the Czech National Bank (CNB), which lost a bunch of outspoken hawks in the latest reshuffle, and where the market started to raise questions about politicians’ influence on the board’s decision-making process. The departing hawks “slammed the door” at today’s rate-setting meeting – delivering a “super-sized” (by Czech standards) 125bps hike that exceeded expectations. The currency, however, failed to rally, because today’s hike can mean an extended pause in a situation when inflation pressure continues to mount.

Now, going back to the two remaining “within target” EMs – it’s hard to see China tightening any time soon (it’s moving in the opposite direction due to growth concerns), but Indonesia is definitely on our watch-list. Indonesia’s central bank (BI) meets tomorrow, and the latest communications poured some cold water on the rate hike expectations. Governor Perry Warjiyo said there is currently no need to “rush into increasing interest rates” because there are no fundamental inflation pressures. Fair enough, especially given that the central bank made a pre-emptive move back in May by announcing additional increases in the reserve requirements for banks. So, it looks like there will be no surprises in Indonesia, but it’s going to be an interesting day in Mexico – bi-weekly inflation in the morning will be followed by the central bank’s rate-setting meeting (and a possibility of a larger +100bps hike!). Stay tuned!

Chart at a Glance: EM Inflation – Targets? What Targets? 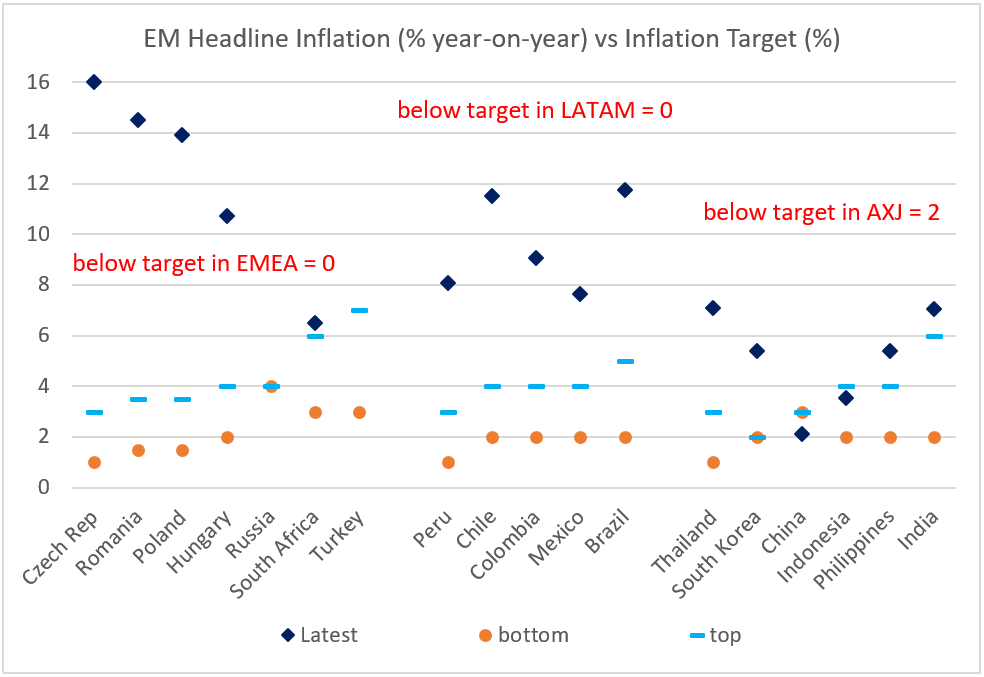 An uphill inflation battle means that the EM hiking cycle is likely to last longer than the Fed’s, albeit at a slower pace.

We are seeing some EM “green shoots” in the predominantly negative global growth dataflow. Can EMs buck the DM trend for much longer?

Global rates rally on recession concerns following weak activity gauges in DM, but some EM central banks do not yet have the luxury of slowing the pace of rate hikes.

Colombia elected a leftist President, but what about the cabinet lineup? Brazil is expected to wind down its tightening cycle – despite hawkish minutes.