The consensus expectations are shifting towards earlier tightening cycles in EM Asia. South Africa is likely to step up rate hikes despite inflation still in the target range.

The U.S. Federal Reserve seems to have settled into a +50bps pace of rate hikes – this is what the market currently sees for the next 3 meetings, but the expectations for the European Central Bank (ECB) are still on the move, with +30bps (each) priced in for July and September (and some analysts are asking what it would take for the ECB to hike by 50bps!). In emerging markets (EM), the focus is gradually shifting to Asia, where we had some hawkish monetary policy surprises lately, and inflation pressures continue to rise. Local swap curves price in additional 90bps of tightening in India in the next 3 months (on top of the inter-meeting rate hike) and the inaugural 25bps hike in Thailand. The consensus also thinks that the central bank of the Philippines will start the liftoff tomorrow, as headline inflation breached the official target.

At the moment, only three major EMs have their inflation within the official target ranges – one of them is South Africa (see chart below). South Africa’s headline inflation remained unchanged in April (5.9% year-on-year), as expected, but the central bank is likely to step up the pace of rate hikes tomorrow to 50bps, because core inflation continues to grind higher, and there are concerns that this might start affecting inflation expectations.

Rising global rates can create problems for EMs with large fiscal deficits and widening/large current account gaps (South Africa is not one of them, by the way) – both in terms of more expensive financing and also because higher rates can drive headline fiscal deficits wider. Chile is among the countries on our “twin deficit watch list” – which also includes Hungary, Colombia, the Philippines, and Turkey – and, unfortunately, its Q1 current account deficit (released this morning) was larger than expected (USD5.575B). The slowing economy (the real GDP growth was negative in Q1 – for the first time since the pandemic) should lead to some current account correction going forward, but in the meantime, large “twin” deficits will continue to weigh on the currency (denting local bonds’ total return).

Chart at a Glance: EM Inflation – Moving Further Away from Target 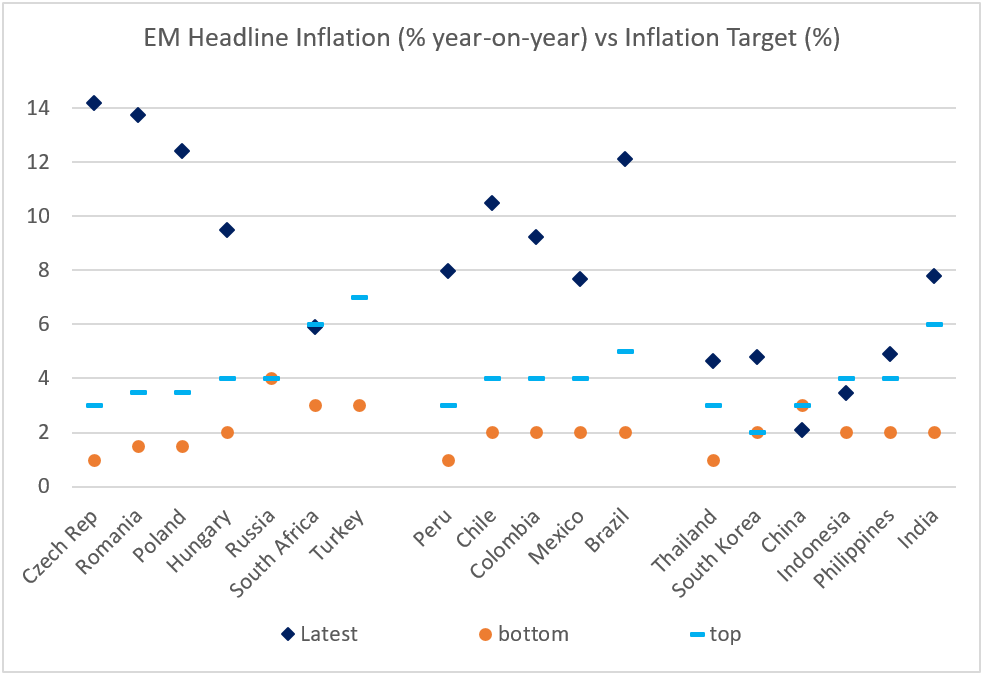 Headline inflation appears to be peaking in several EMs. What are the main drivers, and is there any collateral damage elsewhere in the economy?

Downside inflation surprises point to a slower pace of rate hikes or even a pause in some EMs. In the case of China, lower than expected inflation might not pave for way for additional stimulus.