The Day of the Fed – Nothing Else Matters?

The market clamors for a 75bps rate hike in the U.S. today, followed by 72bps more in July. Does this mean that the rest of the world would have to step up policy tightening?

We actually thought that this was the case yesterday evening (plus, a chance to express our admiration for Metallica – songs only, not the looks). However, the morning started with a big surprise in Europe – the European Central Bank’s (ECB’s) unscheduled meeting to discuss “current market conditions” (=Eurozone’s bond market fragmentation). The end-result was a massive rally in peripheral yields (Italy’s 10-year yield=41bps tighter), as the ECB said it would use the existing pandemic emergency program (PEPP) to keep these countries’ borrowing costs under control. The euro actually weakened after the announcement, even though the market now prices in a solid 36bps ECB rate hike in July and another 52bps in September. Going back to the main event of the day – the U.S. Federal Reserve’s (Fed’s) meeting – the market clamors for +75bps today and close to +75bps in July.

Rate Differentials Between U.S. and the Rest of the World

One final question to ask before today’s Fed meeting – especially if the hawkish expectations are realized – is whether the rest of the world will have to step up policy tightening. The chart below shows the rapidly shrinking differential between short rates in the U.S. and the rest of the world (including some major EMs, which started to hike much earlier than the Fed), which undermines many carry trades, and potentially spells trouble for vulnerable (or overbought) EM currencies. The rate-setting meeting in Brazil this afternoon – where the market expects a slower pace of hikes from now on – would be an important litmus test. Stay tuned!

Chart at a Glance: King Dollar? 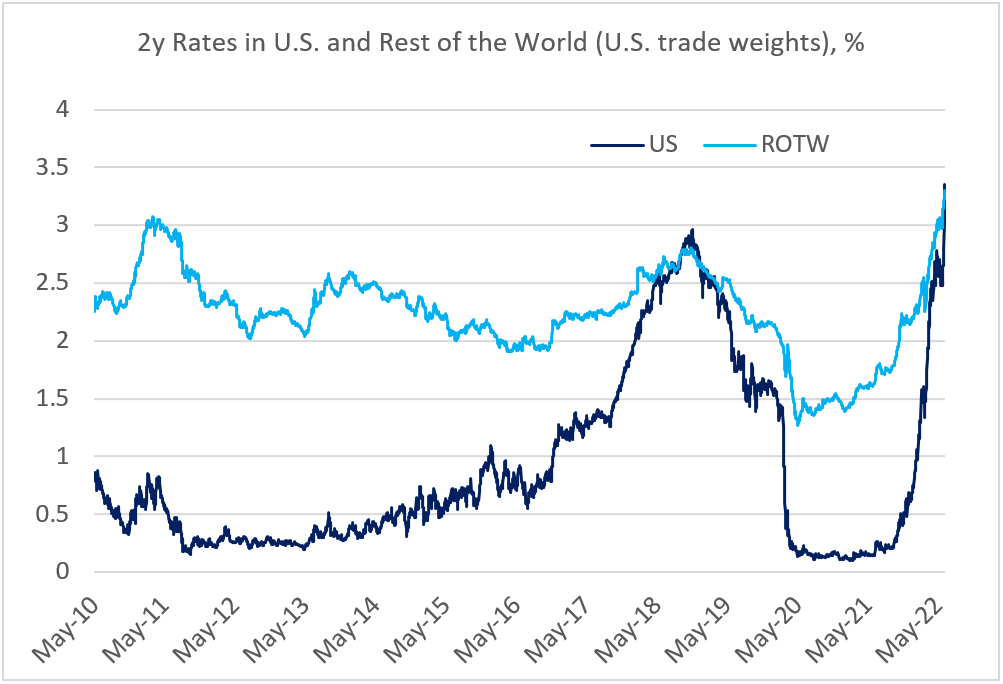 We continues to get upside growth surprises in EM - the question is whether they are going to last as activity surveys in several major economies are flashing red.

Headline inflation appears to be peaking in several EMs. What are the main drivers, and is there any collateral damage elsewhere in the economy?