Much like eating food that has touched the floor for more than five seconds, inflation has been a consideration but not really regarded as a serious concern for many investors. But that’s no longer the case.

Investors last faced inflation risk in the early-to-mid 2000s with the most notable bout of inflation occurring in the 1970s. Many investors today may feel ill-prepared and not know exactly how to deal with this risk, which also means their portfolios may not be properly positioned to respond to a prolonged inflationary environment.

A quick search online confirms that inflation has been a popular subject during this most recent market cycle, which began in early 2020 with the start of the pandemic. In this blog, we address frequently asked questions about the current period of inflation and provide clarity on some asset classes that have historically responded well.

A: Inflation is being caused by several factors converging at the same time. Unprecedented monetary and fiscal policies to get the global economy rolling to pre-pandemic levels coupled with pent up demand and supply constraints have led to the current inflationary pressures.

To go back to Economics 101, there are three general types of inflation: demand-pull, cost-push, and built-in. What began as primarily a demand-pull environment due to the reopening of the economy post-pandemic may now be transitioning to a cost-push scenario as supply chain limitations and rising inputs costs for producers are becoming more prominent. Elements of both occurring simultaneously is helping to fuel the persistent inflation fire.

The bigger question, and the one which may very well determine long-term impact, is whether or not purchasing behavior has already adapted as price increases are reflected in everyday life. This is known as built-in inflation. If consumers believe prices will continue to rise, then psychologically, they may go buy products in excess today and additionally, could demand higher wages to reflect these inflationary expectations. As this mindset becomes more pervasive for both consumers and producers, it is likely to prolong inflation pressures.

Q: What do the latest numbers indicate?

A: Inflation is broadening, and this is challenging the transitory inflation narrative. Over the past year, U.S. inflation (as measured by the CPI) rose 6.2%, the U.S. Producer Price Index (PPI) gained 8.6%, and EU CPI (as measured by the Harmonized Index of Consumer Prices) reached a 13-year high of 4.1%. The Personal Consumption Expenditures Price Index gained 4.4% year-over-year, its highest level in 30 years. Core PCE, which strips out volatile energy and food components is the Federal Reserve’s (Fed’s) preferred measure to gauge inflation and has set 2% as its target level. The Core PCE Index is up 3.6% from last year.1

Q: Where does the Fed stand on inflation at the moment?

A: Over the course of the last year, ongoing comments from the Fed have largely presented the transitory perspective and only recently has the Fed slightly altered its messaging.

While the idea of tapering and rising rates have been discussed as inflation fighting measures in more explicit terms recently, it seems as though the Fed hasn’t fully abandoned their transitory stance.

Federal Reserve Chairman Jerome Powell said before a Congressional committee on September 27, 2021, “As the economy continues to reopen and spending rebounds, we are seeing upward pressure on prices, particularly due to supply bottlenecks in some sectors. These effects have been larger and longer-lasting than anticipated, but they will abate, and as they do, inflation is expected to drop back toward our longer-run 2% goal.”2

Q: If inflation is going to stick around, how should investors adapt their portfolios?

A: Real assets, including natural resources and commodities, have historically performed well in these market environments.

Let’s examine the last two major periods of high inflation, in the 1970s and in the early 2000s.

The lack of a long index track record limits some of the data availability of some assets classes when looking at the 1970s period. But clearly, commodities and gold outperform stock and bonds across elevated inflation levels. Expanded data is available for the next inflation period, which took place in the early 2000s.

During this period, natural resource equities outperformed not only traditional assets but also exceeded the performance of commodities. Additionally, besides gold’s continued role as an inflation hedge, asset classes such as infrastructure and REITs also responded.

Q: Have investors missed the opportunity to reallocate? And are there other reasons to reassess natural resource and commodity-related company exposure?

A: After a prolonged period of hibernation, commodities have rebounded substantially and are one of the best performing asset classes in this recent market cycle. Over the one year period as of the end of September, the Bloomberg Commodities Index is up 42%, the S&P GSCI is up 58%, and the S&P North American Natural Resources Sector Index is up 54%. Despite this outperformance, many investors remain underweight and, therefore, may not be properly positioned to offset inflation. In fact, the energy and materials weighting in the S&P 500 has declined as the commodities market has rebounded.

Source: Bloomberg, FactSet. Past performance is no guarantee of future results.

We believe companies in this area, particularly within energy, industrials metals and gold, have healthy balance sheets, attractive valuations and the ability to generate significant free cash.

Many companies also exhibit what we view as fascinating longer term growth profiles as direct inputs and beneficiaries of the resource transition movement fueled by technological advances and sustainability. The movement towards green energy is creating what has been dubbed by some as “greenflation”. The world remains dependent on traditional energy, most notably oil, but investments are being diverted towards clean energy initiatives. This is causing supply and demand mismatches. Additionally, increased demand for renewable energy is putting upward pressure on key minerals, such as copper and lithium. VanEck recently discussed this topic in the blog Mining a Solution for Clean Energy.

Q: How do concerns over slowing global growth impact the natural resources and commodities argument?

A: There are concerns over slowing global growth. The International Monetary Fund (IMF) in October revised its global growth forecast downward from 6% in July to 5.9% and from 7% to 6% for the U.S. specifically. Additionally, the U.S. September jobs report was below expectations for the second straight month.

Certainly, the simultaneous occurrence of slowing global growth along with rising inflation, or stagflation, is a major factor that investors should consider. However, if history is any evidence, the last period where this occurred was in the 1970s, and as noted above these asset classes performed well.

Q: What options are there to access these asset classes? 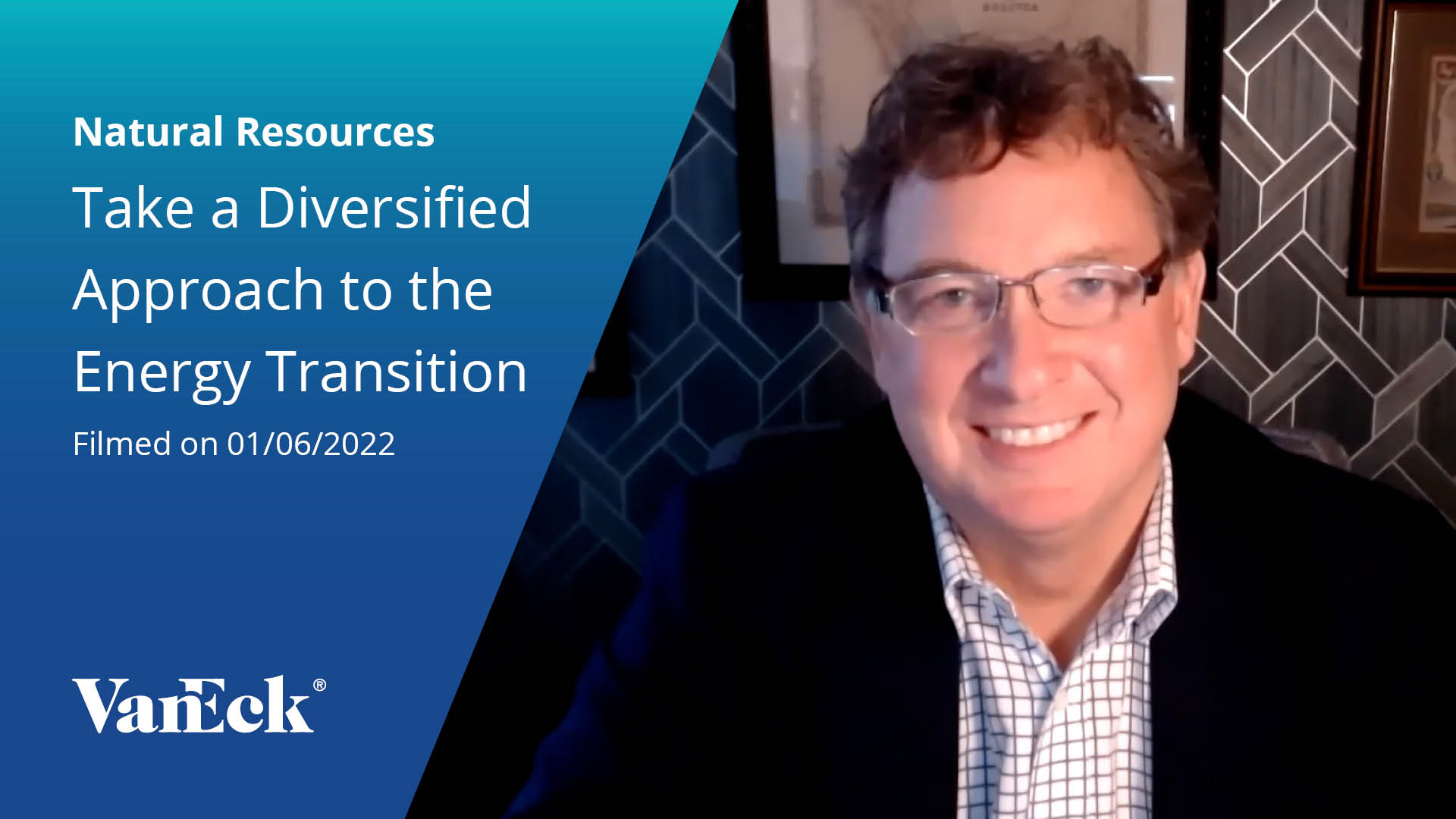 Take a Diversified Approach to the Energy Transition

This is not an offer to buy or sell, or a recommendation to buy or sell any of the securities mentioned herein. The information presented does not involve the rendering of personalized investment, financial, legal, or tax advice. Any graphs shown herein are for illustrative purposes only. Certain statements contained herein may constitute projections, forecasts and other forward looking statements, which do not reflect actual results, are valid as of the date of this communication and subject to change without notice. Information provided by third party sources are believed to be reliable and have not been independently verified for accuracy or completeness and cannot be guaranteed. VanEck does not guarantee the accuracy of 3rd party data. The information herein represents the opinion of the author(s), but not necessarily those of VanEck.

You can lose money by investing in the Funds. Any investment in the VanEck Funds should be part of an overall investment program, not a complete program. VanEck Funds are subject to various risks, including those unique to foreign investing, non-diversification, industry concentration, emerging markets securities, small-cap companies, and debt securities. Please see the prospectus and summary prospectus of each Fund for information on these and other risks.

The principal risks of investing in VanEck ETFs include sector, market, economic, political, foreign currency, world event, index tracking, social media analytics, blockchain and non-diversification risks, as well as fluctuations in net asset value and the risks associated with investing in less developed capital markets. The Funds may loan their securities, which may subject them to additional credit and counterparty risk. ETFs that invest in high-yield securities are subject to subject to risks associated with investing in high-yield securities; which include a greater risk of loss of income and principal than funds holding higher-rated securities; concentration risk; credit risk; hedging risk; interest rate risk; and short sale risk. ETFs that invest in companies with small capitalizations are subject to elevated risks, which include, among others, greater volatility, lower trading volume and less liquidity than larger companies. Please see the prospectus of each Fund for more complete information regarding each Fund's specific risks.

Commodities – Bloomberg Commodity Index is made up of 23 exchange-traded futures on physical commodities, representing 21 commodities which are weighted to account for economic significance and market liquidity.

Equities – S&P 500 Index is a free-float weighted measurement stock market index of 500 of the largest companies listed on stock exchanges in the United States.

Prior to January 4, 1988 the index is Total Return, and after it is Price Return.

REITs according to the S&P Dow Jones Indices REIT Industry Classification Hierarchy. These companies are REITs that primarily own and operate income-producing real estate.

The S&P 500 Index is a product of S&P Dow Jones Indices LLC and/or its affiliates and has been licensed for use by Van Eck Associates Corporation. Copyright © 2021.

Take a Diversified Approach to the Energy Transition

Turning Trash to Treasure: The Revolutionary Power of Renewable Diesel 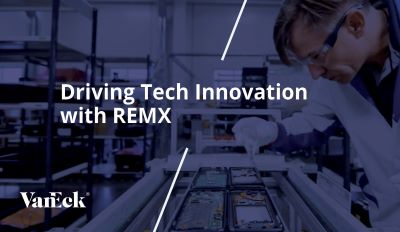 Inflation is top of mind as the U.S. headline CPI ended November at its highest level since 1982. Resource equities historically outperform other asset classes in inflationary environments.

Turning Trash to Treasure: The Revolutionary Power of Renewable Diesel

We will explore renewable diesel and how it is produced, as well as its potential greenhouse gas savings versus other fuels, growth prospects and the current market leaders.

The transition to a low carbon economy is underway and one thing is undeniable: it won't be possible without green metals.

We take an in-depth look at the resources transition and how we believe it is creating and driving investment opportunities.

The rationale for investing in natural resource equities and commodities has stayed consistent: to enhance portfolio diversification, access global growth and hedge against inflation.