At current valuations, we expect that emerging markets local currency bond returns will primarily be driven by currencies for the remainder of the year. If global growth shows signs of a recovery and the stimulative efforts of emerging markets central banks are successful, emerging markets currencies (EMFX) may rally from here as risk appetite and the search for yield re-emerges.

Emerging markets central banks have responded to the recent downturn by prioritizing growth and financial stability over inflation. Many have aggressively cut rates, and in some countries, quantitative easing (QE)-style open market operations have been implemented. Most of the countries in the J.P. Morgan GBI-EM Global Core Index went into the current downturn with the benefit of high real interest rates (nominal rates adjusted for inflation), and have been able to support growth through conventional monetary policy in contrast to developed markets, which already had near-zero or negative real rates. As opposed to previous episodes of risk aversion and capital outflows, we believe external vulnerabilities are reduced for many countries, foreign currency reserves are higher and the downside risks to growth appear to outweigh inflation pressures for now.

One result of lower rates amidst the current risk-off environment has been a steep decline in the values of many emerging markets currencies, particularly those of oil exporters such as Mexico and Russia. In terms of real effective exchange rates, which account for changes in price levels and the balance among a country’s trading partners, the average valuation of emerging markets currencies has not been this low since 1999 and is well below historical averages. 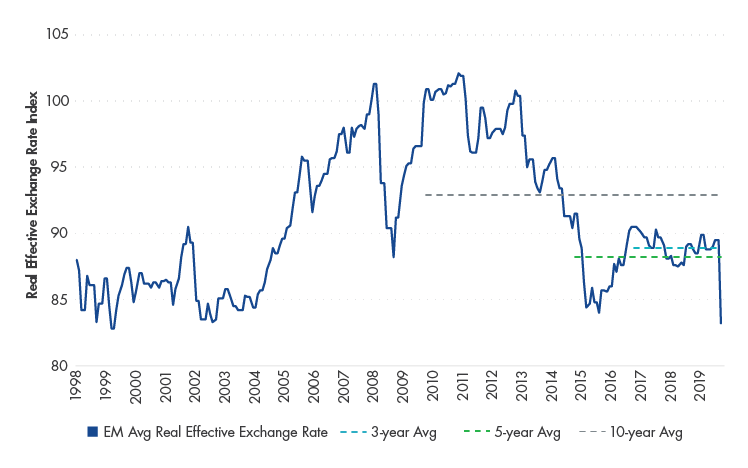 The approach being taken by emerging markets central banks is untested, and there are several risks to this scenario, in our view. Further growth downgrades would negatively impact currencies, as well as worsening fiscal and current account balances, inflation pressures, and accelerating capital outflows. Although oil importers make up the majority of the index, a prolonged period of severely depressed oil prices may also keep pressure on commodity sensitive currencies.