Gold and Bitcoin: So Happy Together Gold spent March consolidating around the $1,700 per ounce level, falling to $1,676 on March 8 before recovering to $1,707 by March 31 and ending the month down $26.33 per ounce (-1.5%) from its February close. Gold experienced a significant decline early in the month following a strong move higher in long-term Treasury rates after Federal Reserve (Fed) Chairman Jerome Powell promised to keep monetary policies steady in a Wall Street Journal interview. While the Fed has anchored short-term rates near zero, Mr. Powell’s comments suggest it will not stand in the way of long-term rates, which have been trending higher since August. 10-Year Treasuries reached a high of 1.76% on March 30. Higher interest rates and an improving outlook for the U.S. economy also caused the U.S. dollar to reach near-term highs. These trends, along with outflows in bullion exchange traded products, have been weighing on gold.

Gold should find support from improving Asian demand. China and India are by far the largest consumers of gold in the world. Asian jewelry demand is price sensitive, which means demand typically increases on price weakness. Gold demand in India and China is showing signs of recovery after been decimated in 2020. The World Gold Council and Reuters report that Indian gold imports were up 45% and 72% in December and January, respectively. Metals Focus shows Chinese jewelry sales returning to normal in yuan terms in the fourth quarter of 2020, while tonnages appear to be trending towards normal in the first quarter of 2021.

Gold stocks performance was mixed on the month, as the NYSE Arca Gold Miners Index (GDMNTR) gained 3.6%, while the MVIS Global Junior Gold Miners Index (MVGDXJTR) declined 2.9%. The positive divergence of the large-cap GDMNTR stocks may suggest the gold price weakness has run its course.

Keeping Tabs on Deficit Spending and the Looming Lunch Bill

The Congressional Budget Office (CBO) reports that the 2020 federal deficit totaled $3.13 trillion, or a record 14.9% of GDP. Perhaps most people don’t quite grasp how much a trillion is, as it gets bandied around so much—million, billion, trillion, whatever. Each trillion in debt is equivalent to $7,785 for every household in America. The total deficit is currently $28 trillion. The CBO forecasts a 2021 deficit of $2.26 trillion or 10.3% of GDP, which doesn’t include the $1.9 trillion spending bill passed in March. President Joe Biden is now asking for trillions more for infrastructure, green initiatives and social welfare. Meanwhile, the Fed keeps buying government debt and limits debt service costs with low rates. In a sane world this would be labelled currency debasement, yet the dollar has been trending higher since January. The market sees all of this deficit spending going towards economic growth with no side effects.

According to a Wall Street Journal op-ed piece by Phil Gramm and Mike Solon, the purchasing power of American families reached record highs in 2020. Total employee compensation was down by $215 billion, yet government personal transfers rose by $893 billion. This was before the $900 billion December stimulus took effect. This suggests that the government’s response to the pandemic went far beyond those who were truly harmed.

Somebody once said, “There’s no such thing as a free lunch”. We believe that sometime in the coming years, the lunch bill will come. Debt and the expansion of the money supply could have any of several consequences:

Gold and gold stocks may hedge against these risks.

Acceptance of Bitcoin No Longer in Question

The gold vs. bitcoin question comes up more than ever now. There have been some interesting developments around bitcoin, showing that it has come into wider use. The bitcoin market has historically been retail oriented, both in terms of its use in transactions and as an investment. However, over the past year bitcoin has made significant inroads to the institutional realm. Its expanding list of adherents includes corporates, high-net worth individuals, endowments and fund companies. It trades on the CME futures exchange and as a Nasdaq-listed trust worth $38 billion (as of end-March). According to Bloomberg, several prominent custodial banks have announced plans to service bitcoin. In March, Citibank released a comprehensive 100+ page report on bitcoin. It appears it can no longer be dismissed as a fad or tech curiosity. The chart shows that, while bitcoin is more volatile than gold or gold stocks, the volatility profile is stabilizing, indicative of a maturing speculative asset class.

In our view, the most challenging aspect of ESG for mining companies will be greenhouse gas (GHG) emissions. The Paris Agreement has become the accepted standard, calling for net-zero GHG emissions by 2050. While such a goal will be a monumental challenge for all mining companies, some will be less challenged than others. GHG emissions are measured in millions of tonnes of carbon dioxide (MtCO2) and classified as Scope 1 (direct – mainly from mine equipment), Scope 2 (indirect - mainly from the power grid) and Scope 3 (value chain – downstream from the mine). Jeffries Equity Research found 2019 Scope 1 and 2 emissions across 18 large mining companies totals 192.6 MtCO2, while Scope 3 totals 2,467.3 MtCO2. Companies involved in iron ore, bauxite (raw aluminum) and coal carry much higher scope 3 emissions. In the following table, we compare GHG emissions of Newmont, the largest gold company, with BHP, the largest diversified miner:

Source: Bloomberg, VanEck. Data as of March 31, 2021. Volatility is a statistical measure of the dispersion of returns for a given security or market index and is measured here using standard deviation of returns on 252-day rolling time period. Standard Deviation is a statistical measurement of dispersion about an average, which depicts how widely the returns varied over a certain period of time. Past performance is no guarantee of future results.

There are, however, major logistical issues facing bitcoin, including the low speed and cost of transactions, how regulatory bodies will treat it, whether some governments will allow it, how it is taxed, how it is collateralized and insured and how to prevent hacks and illicit activity. Bitcoin is a new asset class with high volatility and is part of a stimulus-fueled mania. According to a Cambridge Center for Alternative Finance report, bitcoin has a carbon footprint equivalent to that of New Zealand. Assuming all of this can be ironed out over time, where does bitcoin land in the investment universe and does it affect gold?

The Gold vs. Bitcoin Debate Continues

Bitcoin’s greatest potential is as a decentralized global payment system and substitute for cash. Many investors believe bitcoin is a store of value, and it could certainly become a hedge against currency debasement.

The reason investors focus on gold vs. bitcoin, and not other cryptocurrencies, is the characteristics they have in common. Both have limited supply, sit outside of the mainstream financial system, carry no counterparty liabilities, are uncorrelated assets and have been used as currencies. The anti-establishment ethos of bitcoin users is akin to the lack of trust many gold investors have in the financial system.

There are also stark differences. Bitcoin is not a tangible asset. Like paper currency, it only has value so long as the public believes it has value. Without public trust, it is worthless. Gold is real. It is used in electronics, medicine and aerospace. It is displayed on millions of people around the world every day. It has utility beyond its use as a store of value and is intertwined with human culture and history.

The dawn of the Renaissance also brought a new payment system and store of value. In the 14th century, private family banks arose in northern Italy that dealt not so much with gold and silver, but slips of paper representing gold and silver. These “bills of exchange” were a kind of paper currency that helped to overcome the insufficient supplies of gold and silver and put more money into circulation among merchants. The system failed when governments became too burdened by debts and moved to cancel the bills of exchange. The merchant banks revived in the 15th century with new vigor under the leadership of Florence’s greatest banking family, the Medici, who were the first to create written withdrawals (otherwise known as checks) to increase the speed and flexibility of the banking system (The History of Money, Weatherford, 1997). Perhaps in the Renaissance, as now, some were calling for the demise of gold as an archaic store of wealth. However, gold and paper currency have coexisted ever since.

Interest rates have been falling for 40 years. We are entering a post-pandemic era where rates have nowhere to go but up. The potential for excessive inflation is palpable. Investment strategies that worked for the last 40 years are not likely to work in the foreseeable future. This investment landscape of risk and uncertainty is amenable to both gold and bitcoin. While bitcoin may steal some gold investors at the margin, it is also likely to attract new investors to the safe-haven realm where gold and silver are established. Perhaps gold will find new use as a stabilizer in volatile crypto funds. In any case, it is not a gold vs. bitcoin world. It is a gold and bitcoin world, where both can coexist. 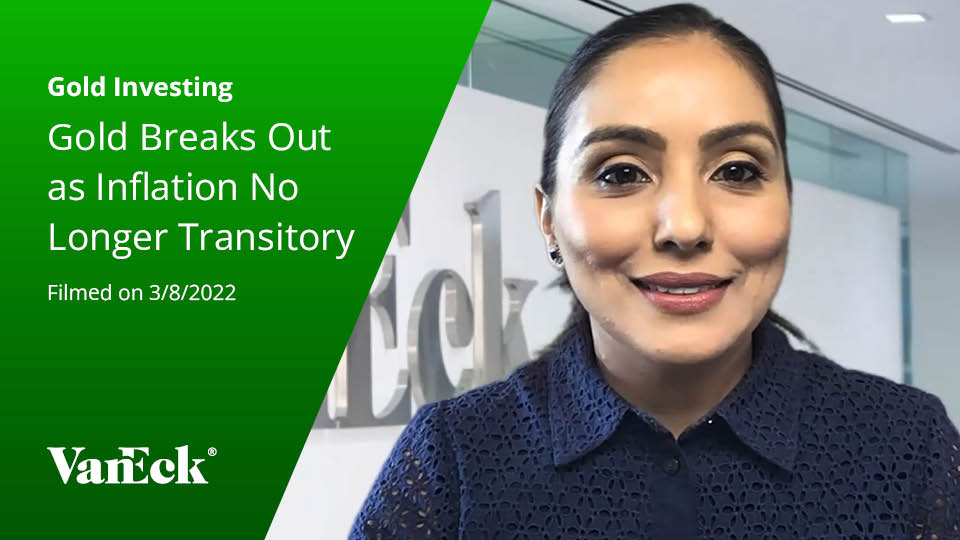 Gold Breaks Out as Inflation No Longer Transitory

Gold Breaks Out as Inflation No Longer Transitory

ESG and Gold: A Conversation on Progress and Potential