Chief Economist, Emerging Markets Fixed Income
The global disinflation story is intact, but is the market getting ahead of itself pricing in sizable EM rate cuts in the coming months?

The U.S. inflation print dominated the newswires this morning, and perhaps the most surprising aspect of the release was the absence of any surprises (albeit many commentators noted that inflation ex-shelter was lower than expected, and that this is a dovish signal). The U.S. disinflation story remains intact, and the disinflation process in emerging markets (EM) looks just as established, despite occasional bumps on the road and some notable exceptions (Hungary, Colombia). India’s inflation was fully in line with this argument – it eased more than expected in December (to 5.72% year-on-year) and stayed within the official target band of 2-6%. Regarding the latter point, India is still in a minority, and inflation in most EMs is well above the respective targets. However, the consensus forecasts are gradually grinding down, and some countries might hit the targets sooner than initially thought (the consensus has been quite excited about Hungary lately, placing it ahead of presumably more “orthodox” regional peers).

China’s inflation releases are still flying under the radar – nobody seem to care about them because the reopening caused a surge in infections, temporarily weighing on domestic activity. However, we should be paying attention for a number of reasons. Authorities surprised the market with the faster and more comprehensive removal of the COVID restrictions, and there is huge domestic pent-up demand for goods and services. So, even though China’s inflation looks benign now (mere 1.8% year-on-year in December), it should accelerate in the coming months. This scenario should lead to higher rates and the improvement of the interest rate differential with the U.S. in favor of China, strengthening the fundamental support for the renminbi, which is an anchor for a number of EM currencies.

China’s rebound and EM (global?) rate cuts should be powerful drivers for EM assets – especially EM debt – this year. The question is whether the market is getting ahead of itself in pricing in very sizable EM policy easing in the coming months (see chart below). EMs’ conservative monetary policy stance in 2021-2022 suggests that central banks (well, most of them) will cut only when it is safe to do so, and they will not necessarily be driven by actions of the U.S. Federal Reserve (Fed). For example, the Governor of the Philippine central bank alluded to rate cuts only in 2024 in his recent comments. Room for rate cuts in Brazil might be affected by the new government’s policy agenda (especially as regards the budget). Stay tuned! 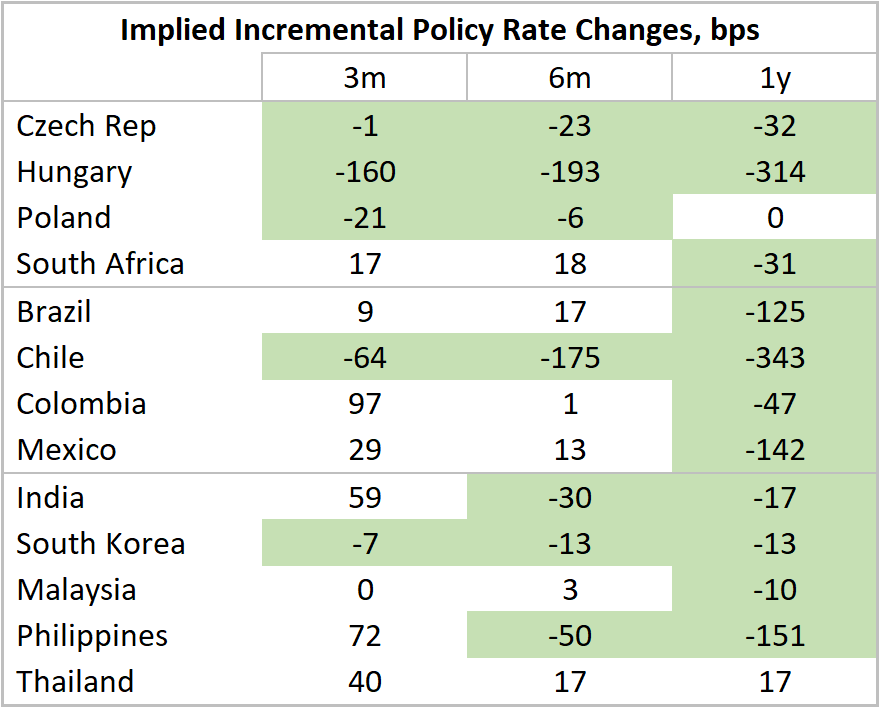