Gold Hits 7-Year High in May

The gold market continued to garner support from the uncertainties and risks associated with the pandemic. The metal trended to a new seven-year high of $1,765 per ounce on May 18, as U.S Federal Reserve Chairman Jerome Powell warned of further risks that the coronavirus might pose to the economy and asset prices. Gold retreated to $1,694 per ounce as the stock market rallied to near-term highs amid the loosening of lock-down restrictions and news of progress in developing a COVID-19 vaccine. However, gold quickly snapped back on renewed protests in Hong Kong over China’s new national security law, which prompted the Trump administration to begin a process to revoke Hong Kong’s preferential trade status. The dollar trended lower at month-end and gold finished at $1,730.27 for a $43.77 (2.6%) gain.

Strong Inflows and a Comeback for Silver

Silver performance has lagged gold for a number of years, driving the gold/silver ratio to an all-time high of 123 in March. Silver mounted a comeback in May, gaining 18.3%, amid some of the strongest inflows into silver bullion exchange-traded funds since their inception. Silver might see further gains as it is still underperforming gold by 14% this year and the gold/silver ratio remains at 97, far above the five-year average of 80.

Gold companies logged another strong month, as the NYSE Arca Gold Miners Index (GDMNTR)1 advanced 5.6% and the MVIS Global Junior Gold Miners Index (MVGDXJTR)2 gained 12.6%. First quarter results were generally as expected, while the full impact of the COVID-related shutdowns will be felt in the second quarter reporting. We estimate a maximum of about 12% of global production was idled in April, however and nearly all has been restarted. Companies have quickly adjusted operating behavior to minimize COVID’s impact, including:

These efforts do lead to increased costs.  However, in the current environment, higher costs due to COVID have been more than offset by lower fuel prices and weak local currencies.

Many companies suspended yearly guidance in March and April. Guidance is now being reinstated and early reports suggest 2020 production guidance for individual companies will decline between 0% and 5%, while cost guidance will increase between 0% and 5%. The pandemic has not affected the long-term outlook for the industry.

Merger of Equals Leading to Increase in Value and Shareholder Returns

Merger and acquisition (M&A) activity continues at a measured pace. In May, mid-tier producers SSR Mining (1.8% of net assets*) and Alacer Gold (0% of net assets*) announced a merger of equals to create a company that we believe will be  much stronger than its predecessors. Alacer has a large, technically complex mine in eastern Turkey, while SSR has several smaller-scale mines in the Americas. We expect the combined company will have better access to capital, global diversification, technical depth and generate stronger shareholder returns. Most significantly, the new SSR will retain the best people from both companies. There was no entrenched management or boards looking to undermine a deal that we believe is in the best interests of company owners.

Historically, acquisitions at a premium have dominated M&A activity. This led to too many companies overpaying for assets that failed to deliver the expected performance, in our view. However, in the current bull market, mergers of equals have become more common as companies find ways to increase value and shareholder returns, rather than overspending to grow ounce production to simply get bigger. As the gold price has trended higher, we found this shift in strategy and greater discipline to be firmly in place at the recent BofA Global Metals, Mining and Steel conference. Several observations include:

The benefits of these efforts are shown clearly in the chart where, unlike the 2001 – 2011 bull cycle, costs remain in check as the gold price rises, creating growing profits and cash flow for the gold companies. 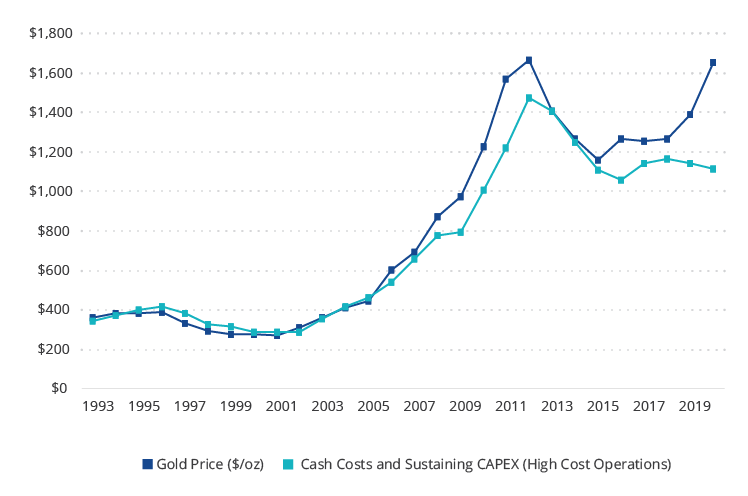 We continue to believe gold may test $2,000 per ounce in the next 12 months as the global recession plays out, the pandemic runs its course and while many businesses and households struggle to return to normal. Our view is social unrest in Hong Kong and the U.S. are new developments that place the recovery at risk with more government stimulus and spending likely. If all of this liquidity brings a cycle of inflation, gold may trend much higher in the coming years.

We believe gold stocks will stand out as the ultimate beneficiaries of a rising gold market. Despite strong performance in 2019 and 2020, gold stocks have yet to claw back the value that was lost in 2017 and 2018 when gold was stuck in a range and investor sentiment turned negative. RBC Capital Markets estimates the average Price/Cash Flow (P/CF) of the majors and mid-tier producers was 8.7X as of May 8, up from a low of 5.3X on March 13. This is below the 14-year average P/CF of 10.7X and far below peak P/CF of 22.1X in January 2008.

Performance of Small Caps May Be Kicking In

In a bull market, large-cap companies typically move first, followed by stronger performance by mid-tiers and juniors as the market advances. The lag in performance between the large and smaller companies is normally measured in weeks.  However, after a year we are still waiting for the smaller companies to outperform. Since gold broke out on June 20, 2019, the GDM, which is heavily weighted majors (66% as of the end of May), has gained 45.6%. The MVGDXJ, with an 87% combined weight in mid-tiers and juniors, has failed to outperform, gaining 44.4% over the same period. Investor sentiment has remained low so far in this cycle. We believe this is finally beginning to change, as shown by the 7.0% outperformance of MVGDXJ in May.

Junior Developers Come to Life in May

There is another class of junior that you will not find in GDM and find very little of in MVGDXJ. These are the junior developers, companies that are taking risks to find and develop the gold mines of the future. Most will fail to meet their goal, but some will succeed and generate spectacular returns, long before they are eligible for the passive index funds.

As active portfolio managers, we aim to identify junior developers with projects that will become profitable mines capable of producing over 100,000 ounces per year. At the end of May, we had 22 junior developers that total 23% in our active gold strategy. We invest and support them as we believe they add value advancing their properties, which commonly takes five years or more to develop. It seems our patience is paying off as many junior developers came to life in May. Pure Gold Mining (2.4% of net assets*) is building an underground mine in Ontario, Canada. Its stock jumped 59.4% in May. Bellevue Gold (2.1% of net assets*) is drilling high-grade veins in Western Australia. Its stock gained 51.8% in May. At market caps of $360 million and $411 million respectively, we still see them as undervalued, even after such heady May gains.

When a junior developer has the skills and financing to build a successful mine, its stock can see a significant rerating. Last year Gold Road Resources (2.4% of net assets*), one of our top junior positions, started production at is Gruyere Mine joint venture with Goldfields Ltd. in Australia. The start-up went well and the stock gained 105% in 2019 and another 28% this year. The stock was added to MVGDXJ in September 2019 and to GDM earlier this year. Its current market cap is $1.1 billion.

West African Resources (2.9% of net assets*) is another Australian company and also one of our top juniors. They recently started production at their high-grade Sanbrado Mine in Burkina Faso. After accounting for COVID-related delays, the project is still on time and on budget and the company recently acquired a second development property from B2Gold (8.3% of net assets*). The stock is in the midst of a rerating as they ramp up production, rising 85% so far this year. At a market cap of $537 million, BMO Capital Markets forecasts West African is likely to be added to MVGDXJ in June.