How One Bond Manager Values Gold and Bitcoin Chief Economist, Emerging Markets Fixed Income
Sanctions on Russia may have changed the status of heretofore reserve currencies. Using a monetary lens, we attempt to quantify the impact on gold and Bitcoin as potential reserve currencies.

Money has changed. Sanctions on Russia’s central bank eliminated its USD, EUR and JPY reserves. This should reduce demand for these currencies as reserve assets, while increasing demand for currencies that can perform the functions of reserve currencies. We believe central banks will act in response to these sanctions, as will private individual actors. To put current events in context, our emerging markets (EM) bond investment team attempted to quantify the emergence of new gold or Bitcoin-backed currency regimes. The bottom-line is that the upside for gold and Bitcoin is potentially dramatic. Specifically, the framework estimates gold prices of around $31,000 per ounce and potential Bitcoin prices of around $1,300,000 per coin. Adjusting for greater strains on financial and monetary systems generates even higher prices.

The Framework for Gold and Bitcoin Valuations from a Monetary Perspective

We built a simple framework to value gold and Bitcoin. For gold, we divide global money supply (M01 and M22) by global gold reserves. The money liability is divided by the reserve asset. We used current reserve holdings in troy ounces for gold, and we used the current exchange rate to convert the monetary base liability into U.S. dollars. We use base money because the econometrics are good (globally), and it’s understandable – it’s just currency-in-pocket/circulation and demand-deposits.

We know the gold holdings of central banks by country, and are able to calculate a by-country price of gold, in addition to the “global” price of gold. This can be useful for measuring potential strains on individual countries’ monetary and financial systems. For example, for a strict gold standard, a country’s central bank balance sheet should generate money/gold of around $1,900 per ounce. This would indicate that the potential strains from their money system are not pronounced (though there are obviously many other important factors. Also, we are not recommending gold standards, and we continue to view all Russian asset prices unfavorably). We run the same exercise against M2, just to enhance the framework (more on M2 and M33 later).

For Bitcoin, we applied the same framework. (BTC ownership by country is unknown, so we don’t conduct a calculation of BTC by country.) We calculate the “global” price for BTC, namely M0 (and M2) divided by BTC, globally. But the concept is the same: the money liability divided by the reserve, or potential reserve, asset. Precious metals are the original reserve asset, but cryptocurrencies are a possible addition/replacement/portion. We only calculate a price for BTC, as opposed to a price for all cryptocurrencies, because there is a limit to the number of Bitcoins that can be created (21 million), whereas the potential amount of “cryptocurrency” is infinite. That is the denominator for the Bitcoin calculation, just as gold is the denominator in the previous calculation.

From Extreme Scenarios to Practical Gold and Bitcoin Price Targets

The “prices” generated in this extreme scenario in which either gold or Bitcoin become the reserve asset obviously need to be adjusted downward – they are just a starting point. Investors should, at least, determine a subjective probability for the outcome. Or they should choose an extent for the outcome: are gold or Bitcoin going to be the sole reserve assets, or will that status be shared with other assets?

We believe most investors will and should use expected value frameworks to make these numbers practical. For example, an investor who sees a 10% chance of gold becoming the reserve asset might say that our “extreme scenario” price of $31,000 per ounce represents a practical price target of $3,100 per ounce. They may see that as an attractive upside relative to current prices, or not.

Our key point is that we are starting with extreme scenarios that may not happen, or may not happen completely. However, they are a way to start the process of quantification that investors should adjust according to their assumptions.

Some prominent commentators (though not nearly enough, we think) are saying money is changed as a result of sanctions on Russia’s central bank. But so far, the output is prose. We are aiming at a framework and some specific numbers. (We performed a similar exercise following the global financial crisis (GFC), to measure the strains created by the U.S. Federal Reserve’s response to the crisis, which involved quietly guaranteeing all off-balance sheet liabilities of major global banks that were part of the U.S. financial system.)

Central banks are likely to change their reserve mix to the detriment of dollars (and euros and yen) and the enhancement of something else, to one extent or another. U.S., Eurozone, and Japanese sanctions on the Central Bank of Russia essentially “disappeared” Russia’s dollar, euro, and yen reserves. As a result, some central banks—and private actors—will be diversifying their reserves.

Many of the new reserves will simply be in existing “emerging market” national currencies such as CNY. But if China’s currency is a top common prediction for the new reserve currency (and we agree it should be), remember that China still has capital controls. And the controls are expanding, on a geopolitical and other bases, which is hardly ideal for a reserve currency. The same goes for cryptocurrencies, although private individual actors, as opposed to central banks, are the more prominent price-setters in that market for now. That leaves us with gold and cryptocurrencies as the initial places to focus.

Central banks and individuals are likely to view “currencies” within a new paradigm, and we’re trying to figure out what that means in precise terms. Put another way, we think it’s very important for market participants to have a response to the question: what happens if China buys $3T of gold? And what happens if people lose trust in fiat currencies and buy something else?

What the Framework Says About Gold

For gold, our key takeaways are:

For those focused on by-country gold price calculations, there’s a wide range of prices. Exhibit 1, below, should speak for itself.

What the Framework Says About Bitcoin

Cryptocurrencies both benefit from this same dynamic, and compete with gold. (So does emerging markets currencies.) Maybe crypto is the new gold and will benefit from this need for new hard money. Maybe not, or maybe it’s both. Our opinion right now is that gold is the easiest thing for central banks – the key actors we have in mind for this particular moment – to think about and purchase. But private actors are nimbler and react to the same underlying motivation.

We did the same calculation for cryptocurrencies. As the potential amount of crypto is infinite, we focused on Bitcoin, which has a supply limit of 21 million Bitcoins. In this regard, it is much closer to gold than other cryptocurrencies. So, what is global M0 and M2 divided by the number of Bitcoins?

The Framework as a Starting Point for Valuing Gold and Bitcoin

We can’t emphasize enough that this is a framework that helps us start to get concrete. There are plenty of issues that push these implied prices down. The most obvious is to incorporate a probability of the scenario.

There are other assets that might fulfill the functions of gold or Bitcoin as reserve assets. Real assets such as real estate are another obvious alternative to gold or Bitcoin, which many define as finite in supply. Maybe even infinite-supply assets such as equities perform currency-like functions. Maybe EM currencies do (more on that below).

We are providing a starting point for any quantification process only. The spirit of our framework is to start a process of quantification, and let you refine your own answer rather than generating “the” answer.

Emerging market currencies (EMFX) are also a potential beneficiary. However, the framework above isn’t suitable for applying to EMFX, so we are not including them in this discussion.

First, unlike gold or Bitcoin, EM currencies are subject to potentially infinite supply. Moreover, we have a formal investment process for emerging market local-currency bonds. And, the process does not distinguish between currencies and interest rates. Logically, separating currency from interest rate is double-counting inflation (unless one is looking at non-economic factors, such as technicals). We are attracted to high real interest rates relative to fundamentals. Period. That is the core of our formal analytical process. We have a second step of analysis to incorporate non-systematic risks. For example, we didn’t own Russia at all because despite being attractive in terms of real rates versus its fundamentals, we saw sanctions risks as too high and too impactful. Anyway, we see EMFX as a potential major beneficiary, but we aren’t discussing it here because the framework isn’t appropriate for infinite-supply assets.

Quantifying the Impact on Gold and Bitcoin Price

Something big has happened, and we are attempting to quantify its impact. So far, the world hasn’t experienced sanctions on a major economic and financial actor like Russia. (Cuba, Venezuela, North Korea, and Iran have been the targets so far, and they are not economically or financially relevant.) China is watching and sees a U.S./Eurozone/Japan that has gone “nuclear” in its economic war with Russia. “Stories” about the future of money are interesting, but if one agrees that this is a potentially new paradigm, an attempt at quantification is needed. That was our intent with this exercise – to be as specific as possible about a nebulous and complicated issue. The key asset-price implication of the big change is significant upside in gold and Bitcoin.

To receive more Emerging Markets Bonds insights, sign up in our subscription center. 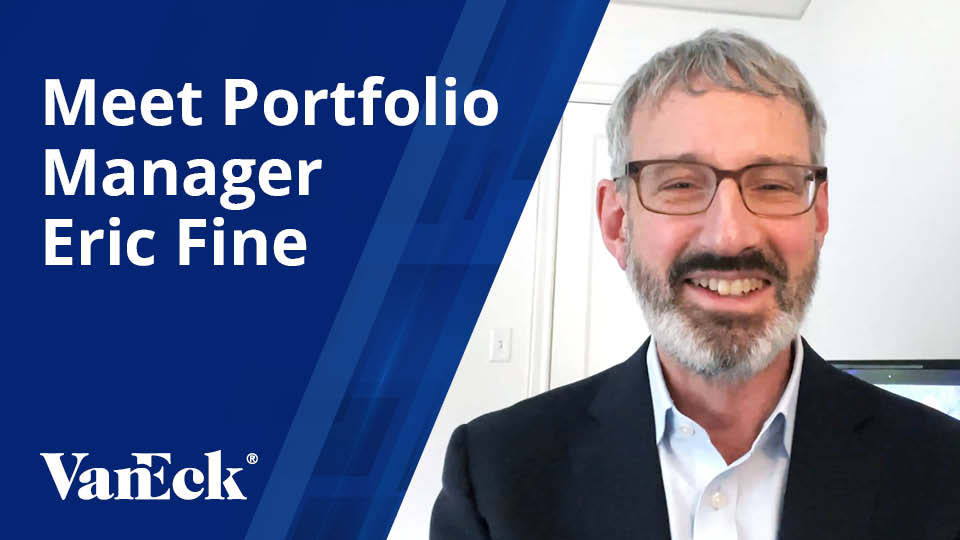 1 M0/M1 is defined as narrow money. It is a way of measuring and categorizing the money supply within an economy. It includes specific kinds of money that are highly liquid. Due to its liquidity, it is easily accessible and can be used for immediate spending.

2 M2/M3/M4 is defined as broad money. It includes specific kinds of money that are considered less liquid.

3 Please see our reference #2 above.

Not intended as a recommendation to buy or to sell any of the securities/financial instruments mentioned herein.

Please note that the information herein represents the opinion of the portfolio manager and these opinions may change at any time and from time to time and portfolio managers of other investment strategies may take an opposite opinion than those stated herein. Not intended to be a forecast of future events, a guarantee of future results or investment advice. Current market conditions may not continue. Non-VanEck proprietary information contained herein has been obtained from sources believed to be reliable, but not guaranteed.

No part of this material may be reproduced in any form, or referred to in any other publication, without express written permission of Van Eck Securities Corporation © 2022 VanEck. 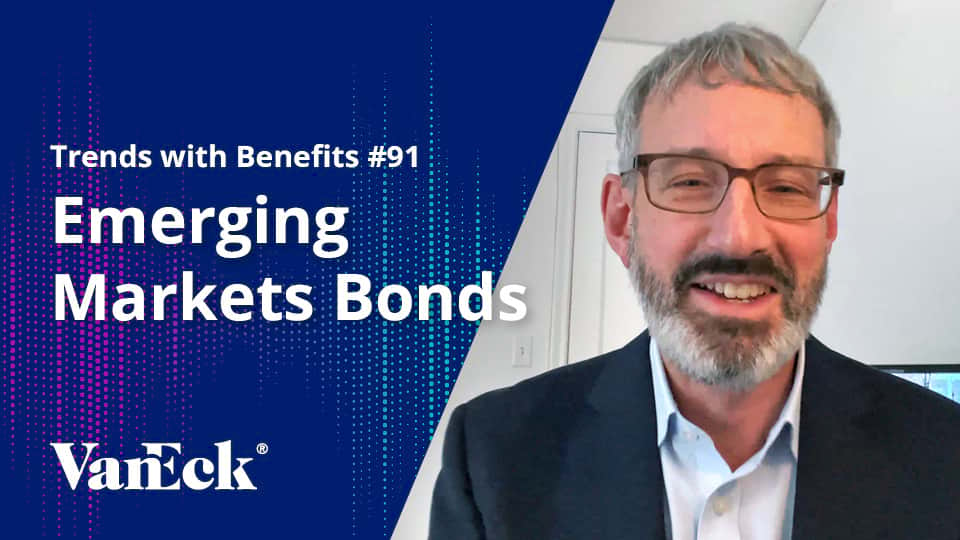 In a world that is worried about endless monetary experimentation and leverage in developed markets, but also looking for attractive yield, emerging markets may have answers.